Do you have an old Angel that you remember loving? But you can’t use it because you lost your charger? Don’t feel like paying for a charger to find out if the Angel is still working?

Battery Charging is Free as a courtesy to our customers and fellow paintball players. A full charge takes approximately 3 hours. Charging will be done on a first come first serve basis.

If you have any questions please contact us at info@DanburyActionSports.com 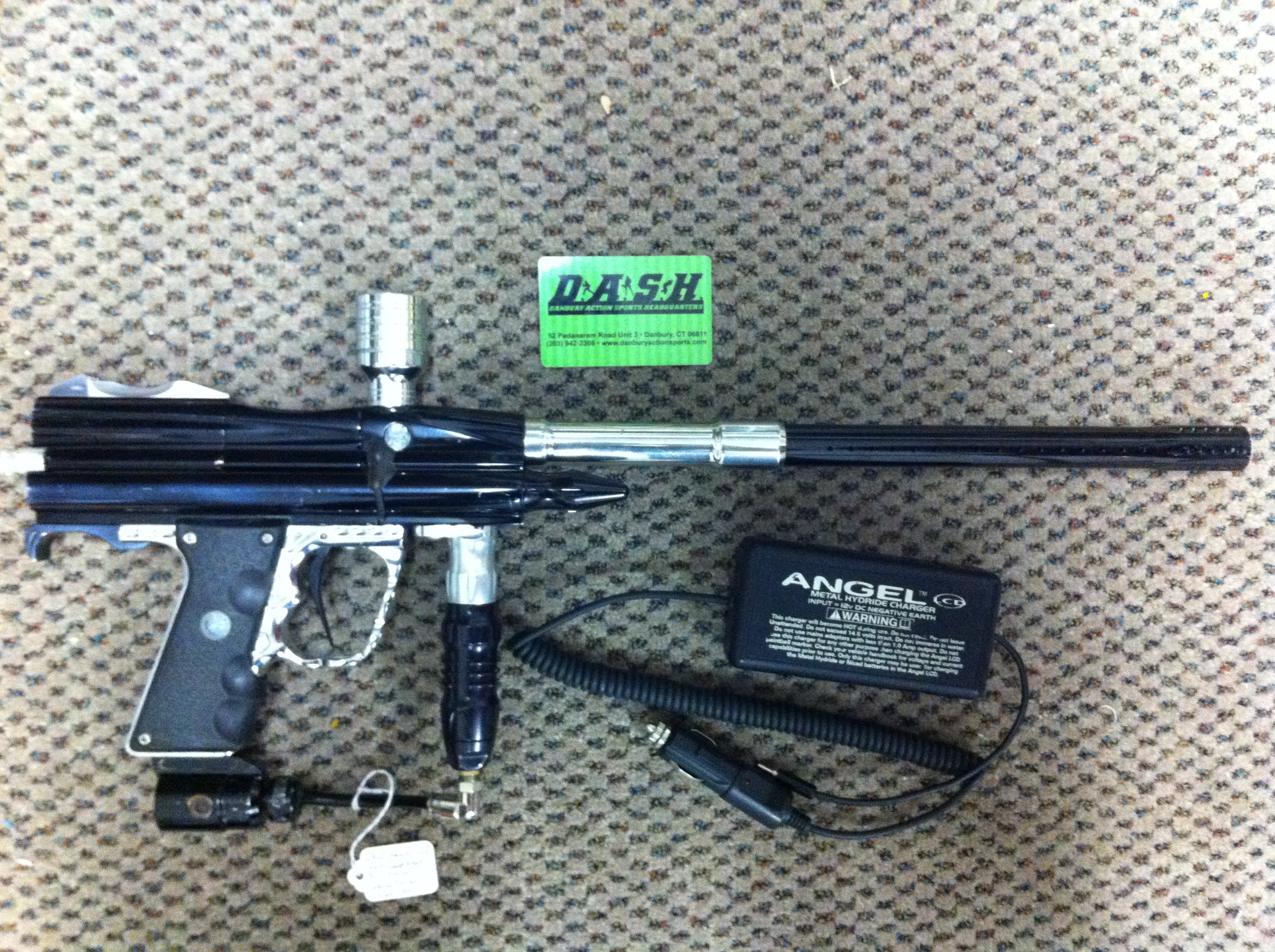 This year, we are proud to announce that we will be attending the Invasion of Normandy event at Skirmish, USA in Albrightsville, PA on July 13, 14 &15. Usually, we attend ION as players. I have been to 9 IONs and 16 games at Skirmish, including big games and tournaments. The field is unparalleled. It has 700+ acres of paintball heaven including dozens (like 40ish) individual playing fields.

ION is one of the most amazing games to attend. It is flat out unreal. The beach assault is vicious, the tanks and Battleship NJ are sweet, and the game is very well run. Add a little historical accuracy and ~5000 players, and you have one serious scenario game.

We will be bringing our collection of used and vintage paintball markers, including a vast array of autocockers, automags, and many many pump markers. We will also have pump accessories to make the markers tick, like those hard to find 1 inch elbows, 50 round hoppers, 12g holders and harnesses, etc. We are also always ready to tech your mechanical and pump markers. Any 16 year old can drop a board into your marker, but not everybody out there can perfectly time your autococker.

If you need any particular items for the event, please let us know ahead of time. If you have any questions about attending ION, please stop by the shop, we can walk you through everything you need to know so you can have a good time playing paintball.

It should also be noted that the store will be closed during the dates of the event.

The Empire CO2 tank is, like their HPA tanks, simply a Pure Energy tank with an Empire logo. A prospective buyer should know that all CO2 tanks run generally in the $10-$20 range and perform just about identically. They all have the same two-way valve design, one burst disc and are unregulated. I have had two Empire CO2 tanks and used each around twice. One continues to work perfectly but the second tank sprang a leak due to a faulty valve the second time I used it.

The problem with CO2 is that it is highly inconsistent especially in low temperatures and freezes the internals of a marker. How CO2 works is that it becomes a liquid at high pressures meaning that it is stored as a liquid in the tank. Some of the liquid becomes a gas and is used to shoot a marker. Every time a shot is fired, the pressure in the tank lowers allowing more liquid to evaporate and pressurize the tank. CO2 is therefore inherently bad for use in cooler temperatures when warm ambient temperature is not available to facilitate evaporation and when multiple shots are being fired rapidly as the first shot will be fired at full pressure but each shot afterwards will have significantly less pressure.

Being stored as a liquid means that the tank can be much thinner and constructed to much less stringent regulations as HPA tanks making it cheaper. While it may seem worth the price, the $15 spent on a CO2 tank is best saved and spent on at least a steel HPA tank.

The JT Spectra Flex 8 is a fantastic buy. At its price of around $40-$50 it is an incredible bargain for the price. Of course it won’t compare in terms of visibility weight and size to the masks costing $100 dollars and up but its level of comfort and breathability is phenomenal. This mask also has a thermal lens so fogging won’t be an issue.

The only issue I found with this mask was that it is difficult to clean on the field. Of course no mask is going to wipe off perfectly but a solid hit on the lenses could bother you for some time if not thoroughly cleaned.

This mask also comes with a “helmet” option that places a covering over the top of the head for serious protection.  A friend of mine has this and it adds about $10 to the price of the mask. In my opinion it is unnecessary, but if you are just a casual player who is worried about face/head hits it might be something you want to look into.

On January 22nd, the Patch reported on a string of vandalism in Monroe, CT. The vandalism consisted of a few paintballs being shot at about a half dozen households and a few automobiles. The paintballs were all of the same color and it is believed all incidents were the same vandal. As a player of 13 years, an owner of Danbury Action Sports and a third year law student, I can speak frankly on the issue.

First, let me start by addressing the vandals and anybody else who has considered engaging in similar deeds. Do you understand how stupid your actions are? Vandalism a criminal misdemeanor, and defacing property makes you liable for the damages you caused. Further, driving with a fully assembled, fully loaded paintball marker in the cabin of an automobile is a semi-automatic firearm charge in Connecticut. This is a felony, punishable by a minimum of 1 year in prison and/or a $10,000 fine.

The first thing parents need to understand about paintball is that it is illegal for those under 18 to purchase paintball markers. So, every time you hear of a young kid vandalizing with his paintball marker, that’s a marker his parents bought but never regulated. The second is that paintball is safer than golf. When wearing eye protection, there is nowhere you can get hit with a paintball that will cause permanent injury. It is the best way to get your child away from that computer or video game console and into the great outdoors for some fresh air.

I hope the community understands that paintball is not about shooting homes, cars or street signs. It is a game of mental skill and physical ability….a Sport. It is not about war simulation or killing. It is illegal and highly unethical to produce red paintballs. No field or shop would ever consider carrying them even if it wasn’t. Sure, there are some paintball markers that look like real guns, but most of these were originally design for military and police training. The highest quality paintball markers look like toys and could never be confused with a real gun. They are tools of the trade, just like cleats, baseball bats and motor-cross bikes. Finally, 99% of paintball players would never expose our sport to the bad media associated with vandalism or injury to innocent people for fear of losing what we love. Please, do not judge us by the actions of a few rotten apples.

The solution to this vandalism issue is relatively simple. Players need to respect the sport and understand that even if you didn’t get caught doing something dumb, it still reflects negatively on the sport. The paintball community needs to self-regulate, as peer influence is usually strongest. Parents need to regulate the gifts they give their children because even if your child is obedient, their friends often gain access to their “toys”. The community needs to keep an open mind and take action against violators of the law, not a community of athletes simply looking to engage in their favorite pastime. The magic elixir in this case is exposure and understanding for the sport of paintball, and this we can all work on.

DASH would like to say Congratulations to Inner Circle Paintball Team. Inner Circle is our newest sponsored team.

It is a team from Ridgefield, CT comprised of 4 high school sophomores.

The team will be local for many more years, and we are proud to help them grow as a team and individual players.

Show them some love or drop them an inspirational message here: http://www.facebook.com/InnerCirclePB

These companies provide the highest quality and value per dollar for consumers, and we are proud to offer their products in the coming season.

Contact us soon to find out about the newest 2012 gear from Dye, Proto, Bob Long, Vanguard, Planet Eclipse, Empire, Tippmann, Spyder, Valken, RAP4, Sport Smoke and just about any manufacturer out there.

Danbury Action Sports Headquarters is switching over to winter hours.

The only difference is that we will be closed on Sundays.

We will be available on Sunday morning by request only, and at our discretion. To arrange Sunday service, contact us in person, by phone or by e-mail.

Figuring what to get somebody for Christmas or Hanukkah, and stay within your price range, is difficult and stressful. Paintball makes the perfect gift for multiple reasons:

1) The Paintball Knock-out Gift- Lets say you need to get somebody something completely and utterly impressive. You can get them a paintball gun with all the bells and whistles such as anti-chop eyes, multiple rates of fire and fully electro-pneumatic operation for under $300. It will be quite the impressive gift.

2) Stocking Over-Stuffers – The nature of paintball and paintball equipment allows for many small parts and upgrades that can improve the functionality or customize the looks of the paintball gear and the paintball player. These items are often rather inexpensive and very abundant and make for perfecting gifting. We have many items under $20, including 500 count bags of paintballs, head wraps, gloves, hats, t-shirts, anti-fog, reusable paintballs, barrels, marker upgrades and many more items that make perfect small sized gifts.

3) Get Them Outdoors- many of todays most sought after gifts are meant to keep your kids (and yes, even most adults) indoors fixed to a computer or television screen. Paintball gets them outdoors, and lets them live out their video games fantasies with their own hands and feet. A starter package gift for a new player that includes a semi-automatic mechanical paintball marker, an anti-fog mask, and a compressed air or co2 tank can be had for under $200.

If you have any questions about availability or whether we can get you a specific item in time for Christmas, give us a call at 203-942-2308. 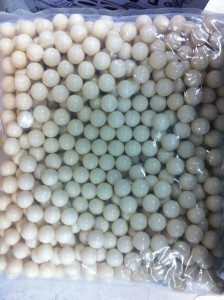 We just got in a fresh shipment of Valken/FightCo Infinity Paintballs. These paintballs are of amazing quality and are recreational paintball priced. The 2000 paintball cases come in orange and white, and we are doing mixed half and half boxes as well. At $45 a case, you can’t miss with this paint (all puns intended, seriously, it shoots great). 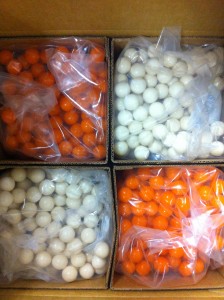